I'm certain that my compatriot is not unique in having this kind of domestic squabble. And, with tomorrow's release of Assassin's Creed 2 and Left 4 Dead 2, I can only imagine that this will get worse. If you haven't ordered those games yet but intend to do so, please buy it from the links on the right. We get a tiny percentage of the sale, and you get a game you were going to buy anyway.

We are not going to do a comic about Sarah Palin. Not again. When her book deal was first announced, I convinced Paul that a satirization of what that woman could possibly write about would be timely, funny and well-received by the comic community. I was wrong on just about every front, but hindsight is always perfect and an encroaching deadline can make a bad idea seem brilliant.

Also, I pretty sure I was under the influence of some industrial-grade cold medication at the time. I can't remember.

However, I wanted to at least mention her memoir since it's all over the fucking place. Her recollections of certain events have no clear connection with reality, yet I imagine they will harden into what I'll charitably call "common knowledge" before the year is out.

I don't really mean that to be condescending, but I am fully prepared to condescend to this person - this person who actively denies evolution, forced rape victims to pay for their own rape kits and shows a clear disdain for Americans while claiming to love America. She is a caricature, the kind of person that is so ridiculous that you tell yourself you must be dreaming when other people take her seriously.

Like the eternal struggle between The Devil and Jesus, where everything bad you do is the work of Satan and everything good you do is because Jesus intervened, so too goes the devotees' logic that whatever Sarah Palin claims to be true is The Truth, and anyone who says different is a goddamned Communist out to destroy America. Or they just hate strong women and mothers. It is a parody of polarization, a sad satire that is slowly becoming a reality.

Maybe the problem isn't as big as I think it is. Or maybe it's worse. All I know is that I avoid these kinds of conversations with strangers because I have had people shout very nasty things at me for even suggesting that Sarah Palin might be a demonstrable goddamned liar.


I found this during some StumbleUpon-ery. I like how Paul and I are on completely opposite ends of this flowchart. 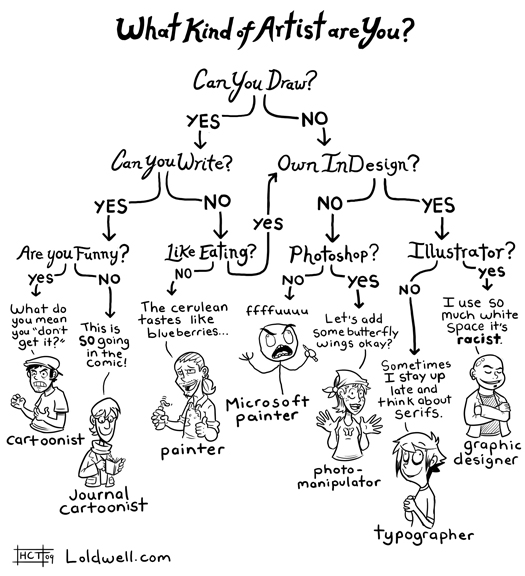